The best app for chess lovers ♡

The classic slot car game... now in your phone!

Some people is asking us about the “ELO” and “Move Time” options on Mobialia Chess. ELO is an statistical chess rating based on games results playing against other persons:

Our Carballo Chess Engine has an estimated ELO of 2100 on a PC, playing against other chess engines. Those test results are shown on:

On a Nexus one (with 1GHz processor) with Froyo (Android 2.2) this sould be something similar. But in other (slower) mobiles may be lower.

If you select on the settings ELO 2100, the engine will be playing at his maximun strength; selecting lower ELO levels, the chess engine lowers its playing strength, introducing errors and reducing game knowledge.

We made some statistic analysis to determine the relationship between the errors introduced and the ELO level, so it should be something aproximated.

The move time is different to ELO, it’s only the time that the engine will be thinking for each move. To save battery the game does not ponder (think on opponent’s time). 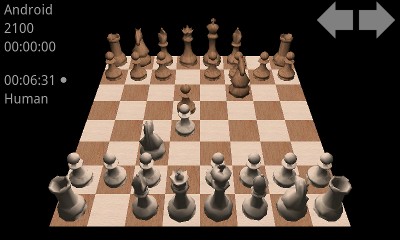 We just released Mobialia Chess v4.0 including a new 3D board feature (in beta). It works only in landscape and this first version does not show board coordinates nor captured pieces difference.

At the moment we are using pieces models with a low amount of faces to be compatible with many different devices. We did some test with better models, but it was causing out-of-memory errors on low end devices. 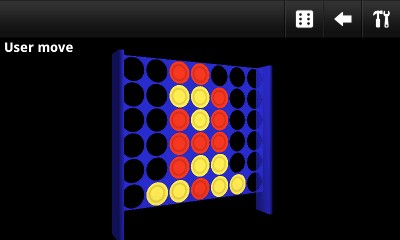 We released a 3D version of our famous Four ina a Row game. It’s like our original 2D game and you can move touching the board, but you can also rotate the board touching on any empty region.

Features the same strong AI than the 2D version (so strong that we have a lot of negative votes saying that it’s impossible to win).

We just released a new Android app to track your Twitter followers.

One of Twitter’s lacks is that you cannot see who unfollowed you. This app solves this problem showing for each one of your accounts a list with your lost (and gained) followers.

Supports multiple accounts and also displays a graph with the followers count progression. It’s available for free at the Android Market. 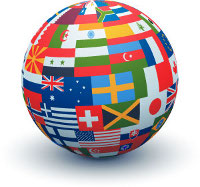 Using PASTT: PHP Android String Translation Tool we configured a page that you can use to send us translations of Mobialia Chess:

This tool is quite simple to use, you can add new translations or modify the existing. Be careful to maintain the “\n” and “|” characters on their positions.

Thanks a lot for your contributions! 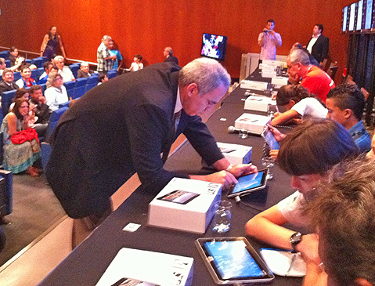 This game was played at the Brazilian Federal District against 13 opponents with some politicians among them.

The event was a presentation of the new Semp-Toshiba myPad Android tablet featuring a 10″ screen and a Nvidia Tegra 250 dual-core 1Ghz CPU. This is the fist tablet device made in Brazil!

We are very proud that Semp-Toshiba choosed our chess app, and to celebrate it we released a new Mobialia Chess version with portuguese translation. Android tablets are great devices to play chess and we expect a big increment of tablet devices running our chess app.

At the moment our Chess app does not include the opening names, but if you want to learn openings, you can use a PGN file with one game for each opening and browse it with the embedded PGN viewer.

Download this file, open it with Mobialia Chess and then play it. When you are at the end of the file you can continue playing in the offline mode with MENU->Play Position.

We published today a complete version of Mobialia Chess called “Mobialia Chess (Ads)” available to download for free at the Android Market. This is possible because this app now shows ads on the board screen. The paid app continues to be available for those who wants to get rid of the ads.

This website uses cookies to improve your experience while you navigate through the website. Out of these, the cookies that are categorized as necessary are stored on your browser as they are essential for the working of basic functionalities of the website. We also use third-party cookies that help us analyze and understand how you use this website. These cookies will be stored in your browser only with your consent. You also have the option to opt-out of these cookies. But opting out of some of these cookies may affect your browsing experience.
Necessary Always Enabled
Necessary cookies are absolutely essential for the website to function properly. This category only includes cookies that ensures basic functionalities and security features of the website. These cookies do not store any personal information.
Non-necessary
Any cookies that may not be particularly necessary for the website to function and is used specifically to collect user personal data via analytics, ads, other embedded contents are termed as non-necessary cookies. It is mandatory to procure user consent prior to running these cookies on your website.
SAVE & ACCEPT